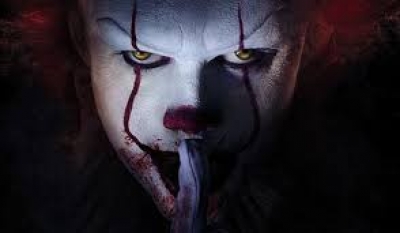 It’s October 1988 and Bill Denbrough (Jaeden Lieberher) and his little brother Georgie (Jackson Robert Scott) are in the bedroom building a paper boat so Georgie can sail it down the neighborhood roads. Before it is finished Georgie has to go down to the cellar to get some wax for the boat. All I can say is that when I was a kid his age the cellar is the last place I ever wanted to venture into, it was always dark, damp and as a kid everything scary lived down there. So personally, I like so many other people can probably relate to Georgie’s fears. Once the paper boat is waxed and ready to go Georgie runs outside in his yellow raincoat to set sail but before you know it the boat ends up in the sewer drain. When Georgie tries to retrieve it he meets Pennywise (Bill Skarsgard) and the last to see Georgie was an old lady and her cat.

June 1989, Bill and his family are trying to deal with Georgie’s disappearance and Bill will not accept the fact that he is dead. Mike Hanlon (Chosen Jacobs) is working on a sheep farm and his job is to kill sheep with a bolt gun for slaughter. This is not exactly what Mike wanted to do with his life let alone kill a living breathing creature. Beverly Marsh (Sophia Lillis) is considered to be a bit of a whore in this little town of Derry basically for kissing a boy but we all know how stories get started and can ruin a kid’s childhood. It also doesn’t help that her father (Stephen Bogaert) is a bit strange, over-protection and possessive of his young daughter. There’s a new chubby kid in school, Ben Hanscom (Jeremy Ray Taylor) and he is already a target of the bullies, Belch Huggins (Jake Sim), Victor Criss (Logan Thompson), Patrick Hockstetter (Owen Teague) and the craziest of them all Henry Bowers (Nicholas Hamilton) hard to believe his father is town Sheriff (Stuart Hughes). Richie Tozier (Finn Wolfhard) is the talker with a sense of humor in the group, Eddie Kaspbrak (Jack Dylan Grazer) is the germ-a-phobic and Stanley Uris (Wyatt Oleff) is afraid of his own shadow most of the time.

All these kids are targets of the bullies but one by one become the target of Pennywise. Ben has uncovered in the library that adults have gone missing more in Derry than anywhere else and as for children even much more so. The town has listed a curfew of 7pm and even though it’s now summer vacation from school everyone must be in by the curfew. Posters are going up around town showing missing kids but the gang of close friends still try to enjoy their summer with one in particular having a crush on Beverly. Yet when the kids confide in each other of horrific encounters with a clown they begin to piece the puzzle together knowing that they must ban together without fear in order to fight this child eating clown that appears every 27 years. In the end, the survivors vow that if this clown ever returns alive that they will come home to kill it. That is if it’s not already dead!

I loved the story and the way it was directed which had many elements of “The Goonies” and “Stand By Me”. The writers made the kids real with bad language, sexual jokes, and well just many good and bad moments of growing up in a small suburban town. Yet except for these kids I’m not too sure of many scary clowns eating children on the streets of our American towns. If you did get to see the original which for its time I thought was scary this modern version will truly be scary for the new generation but I would not recommend watching the original first mainly due to so many similarities. I did not find it to be as scary as it was thrilling but my friend April must have jumped out of her seat at least a dozen times. A great score, good character development and an outstanding cast of child actors this film is definitely worth seeing on the big screen in a dark theater with your close friends. All of the child actors were outstanding but Lieberher, Lillis, Wolfhard and Taylor are the award winners for me and of course Skarsgard who brings Pennywise to life and probably a coming attraction of your nightmares for evenings to follow.

More in this category: « Logan Lucky Home Again »
back to top

We have 679 guests and no members online