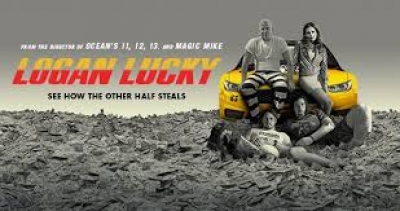 Jimmy Logan (Channing Tatum) lives in Boone County West Virginia but works in Charlotte North Carolina in construction. At least he did until his boss fired him for having a pre-existing limp. You see his company that is replacing rotten pipes, and filling in sink holes from pre-existing landfills under the Charlotte Motor Speedway is a bit concerned that Jimmy is a liability so they fired him. He shares custody with his ex-wife Bobbie Jo Logan Chapman (Katie Holmes) of their daughter Sadie (Farrah Mackenzie). Bobbie Jo is living the high life married to car dealership owner Moody (David Denman) who she shares two young sons.

Clyde Logan (Adam Driver) is a one armed bartender at the local bar and grill, Duck Tape, who previously served two tours in Iraq. At home Jimmy keeps a to do list on his wall outlining how to successfully rob a place. The reason for the list is that Jimmy has decided to rob the Speedway during NASCAR’s Coca Cola 600. He discusses the details with Clyde and Mellie Logan (Riley Keough), both on board for the heist, on how they are going to break into the Speedway vault. Their main tool for the robbery is a grown man sitting in jail in a onesie still serving five more months, his name, Joe Bang (Daniel Craig). Joe along with his brother Sam (Brian Gleeson) and Earl (Charles Halford) are the final main pieces to their plan. The big problem is how exactly they break Joe out of jail past the guards and Warden Burns (Dwight Yoakam) to pull off the heist and then return him to jail without ever knowing he was gone. Well Jimmy has a plan! Painted cockroaches, cake and gummy bears later the robbery starts to unfold with and without complications. In the end, Sadie wins Miss Pretty West Virginia Pageant, the fire is out at the jail, Bobbie Jo moves south and Jimmy takes a job at Lowe’s, a seasonal position, for now! As for FBI agent Sarah Grayson (Hilary Swank) she’s just passing through town! Or is she?

The movie is well directed but I felt like it was way too stretched out. The writer could have at least cut about a half hour of footage and left it on the editing floor. Actually where I thought it was going to end it actually still kept going, adding in a few extra twists into the heist. There are a number of small supporting characters that help to add to the story line which is laced with some dark humor but overall I don’t believe they were needed. With such an amazing cast of actors I would have enjoyed a more focused outline of the heist rather than trying to add elements into the film that were not needed. It has some nice cinematography along this good old boy town in West Virginia but again it all circles around to the story is just too long.

Craig and his bleached hair and steel blue eyes do a nice job working with Tatum who really has come into his own as a big time star. Katherine Waterson who plays Sylvia and runs a mobile medical RV based on charity and donations is one of those side road characters that is inspirational in the end but again just filler material. Driver is quite interesting with his dry humor and Holmes seems to hold her own as does Keough, Gleeson, Halford and Mackenzie but albeit the film could have won me over with a bit more development on these characters and less planning time and side stories on others. I liked it but really would have liked it more if it weren’t two hours long.

More in this category: « The Hitman's Bodyguard It »
back to top

We have 114 guests and no members online