Guardians of the Galaxy Vol. 2 Featured 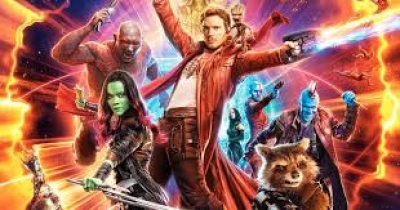 Guardians of the Galaxy Vol. 2

It’s 1980 on Earth and a young Ego (Kurt Russell) is courting a young woman, Meredith Quill (Laura Haddock) from the state of Missouri. Thirty four years later, the Guardians, Peter Quill (Chris Pratt), Gamora (Zoe Saldana), Drax (Dave Bautista) and Rocket (voice of Bradley Cooper) are fighting a beast and out to protect the Sovereign and their batteries which are a huge power source in the cosmos. Meanwhile baby Groot (voice of Vin Diesel) is dancing to some tunes, Quill’s of course, and getting in the way of the adults during this battle with the beast. When finished with their battle, Gamora requested one item from Ayesha (Elizabeth Debicki), the leader of Sovereign, that her sister Nebula (Karen Gillan) be released into her custody and thereafter the Guardians are on their way into the depths of the galaxy.

Not before long the Sovereign fleet is out to destroy them. Why you may ask? Well a little raccoon apparently stole some batteries from the Sovereign and they want them back. Before you know it when the battle begins to get worse all comes to a quick ending and the Guardians are forced to land on a nearby planet. Now not only is the Sovereign after them but Ayesha also pulled in Yondu (Michael Rooker) and his forces to capture Quill and the gang.

Meanwhile Quill has always wondered about his father and who it may be, it seems he was raised from a boy to a man by Yondu, a man with a bad reputation by many in the Universe especially Stakar Ogord (Sylvester Stallone). Well wonder no more because Quill has found his dad, Ego, who is living on his own planet with his so to speak, pet, Mantis (Pom Klementieff) strange but sweet young thing. Questions do arise, like is Ego Quill’s real father, if so why after all these years has he searched him out now, and who the heck is Mantis, but on another note if he is his father did he really love Meredith? All these questions and more will be answered as the story continues.

In the meantime, a sibling rivalry continues, Drax makes fun of Mantis, father and son begin to find truth, Rocket is still as crazy as ever and Groot is the most adorable little character you could ever imagine. Everything is temporary except for the fact that the Guardians are more than friends they are truthfully all family and sometimes what you’ve always been searching for is standing right in front of you. Who’s your daddy? Make sure you stay for the credits to find out about Adam and “I am Groot” at puberty.

I absolutely enjoyed this film from beginning to end but not as much as I liked the first “Guardians of the Galaxy”. The CGI, special effects, the costumes, vibrant colors are all phenomenal and along with the use of 3D it all takes you on a spectacular adventure. But! I thought the writers went too far with the story line, if they centered on the main core of the story, father and son, I think I would have enjoyed it more. The other side bars to the film help a little but also hinder by throwing in too much. The sibling rivalry I thought could have been left out and as for Groot he is sometimes over-used in the story although he does add a very loving yet humorous cuteness to the story. Actually even though I thought he was used to much I absolutely loved him the most out of all the characters. The direction is well done considering there is so much going on with the Guardians, Yondu, and the Sovereign amongst several other side stories. The writers once again mixed in some hysterical one liners but with so much going on they sometimes get lost or hard to hear. Yet this makes the reason to go see the film a second time. As for the score it wasn’t as good as the first film either, this one was a bit more sentimental and dreamy rather than fun and upbeat. Albeit aside I would highly recommend this film but in my opinion sometimes a little less is more.

Pratt was not only super-hero worthy but he also knows how to make fun as he does throughout this story. Saldana is definitely the straight-laced character with very little emotions but you can see they are on the edge of a break through. Bautista for such a big man he can really strut his stuff and surely knows how to deliver a funny line. Diesel as the voice of Groot was cute but basically all he says is “I am Groot” this time as a child and as for Cooper as the voice of Rocket he was spot on so much so that it was hard to believe that was Cooper behind those black eyes. Rooker has a nice role and brings out the best of all sides of him but I kind of felt I could have gone without Gillan and her character although she delivers it well. Russell is always a pleasure to watch even when they made him look forty years younger. Debicki as the Sovereign gold-faced leader was perfect until she let her hair down but thankfully she later put it back up. Overall the film will do great at the box office and I’m sure Groot will be talked about quite a bit since he truly is the adorable one amongst all the good, the bad and the ugly.

More in this category: « The Dinner King Arthur: The Legend of the Sword »
back to top

We have 229 guests and no members online