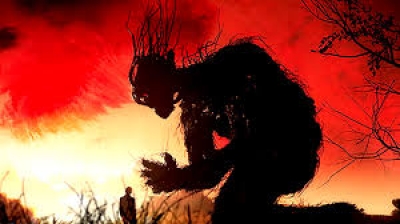 Review written by Jon Patch with 2.5 paws out of 4

The film opens up to a young English boy named Connor (Lewis MacDougall) as he struggles to hold on to the hand of someone he loves before she falls to her death. Is this truth or is it a nightmare that he tries to cope with every day of his life. He lives with his mother (Felicity Jones) in a nice home where his bedroom window overlooks a church, cemetery and a beautiful and very old Yew tree. He is a young lad that loves to draw sometimes with his mother but mainly on his own. He attends the local school where as it seems many other students stare at him and some bully him on a regular basis. Connor grieves for his mother who happens to be fatally ill with possibly very little time left so time is of the essence.

One night when Connor sat drawing at his desk in his room the wind begins to pick up and odd occurrences begin to happen, he looks out his window to see the Yew tree taking the form of a human and coming alive walking straight at him in his bedroom window. Connor does not seem to be afraid and the tree (voice of Liam Neeson) tells him that over a short time he will tell Connor three stories and at the end of the third the tree wants to hear one from Connor and it must be the truth, the nightmare he dreams of often. Do you ever wonder what the meaning of a dream is maybe a dream is everything that surrounds us on a daily basis?

Connor’s Mum has become worse so his Grandmother (Sigourney Weaver) has come to live with them to help. She and Connor have nothing in common nor do they get along with each other. His father (Toby Kebbell) has separated from his Mum and he now lives in America but has made time to visit his son and his dying Mum. It seems that over time exactly at 12:07 the tree would appear to tell Connor the stories all different but with one similar relevance. Connor hopes the tree will heal his Mum believing it holds the powers to do so. He sometimes feels invisible as if no one notices him or pays attention to his cries, even when he does bad things he does not seem to be punished for them. Why?

This is a young man who loves his mother so much he wishes he can give her 100 years. Humans are complicated and so is life and for that fact so is death. His Grandmother is angry and always so neat and tidy, his father is distant and hardly ever seen, his mother is dying and as for Connor he has told the truth and has allowed the one thing that everyone had in common to let go.

I loved this story even though at times I thought some of it dragged with a bit of trouble understanding some of the dialogue maybe due to the accents or possibly from the woman sitting close to me that had to mumble during select scenes. That aside I thought the writing was well done and the direction almost as well done but the premise of the story was very deep and touching to the soul. I think the father in the story was a bit unnecessary making me feel like it was to fill time. The writers could have just made the statement that he moved to America and left him there. The special effects are captivating along with the score but it is the relationship between the tree and Connor that intrigues you throughout the story. There is a mixture of animation in the film but thankfully it is tastefully added and not silly or distracting. Weaver does well as the Grandma and does well keeping her accent in check overall but I must say I liked the fact that the writers gave her a human side at some point. Jones was spectacular here but I wish the writers gave her more scenes and a broader relationship with her son in the story. She is the focus to his struggles but should have been a bigger focus to the audience. As for MacDougall he was a superb cast and deals with this story line brilliantly. Neeson of course brings that great scratchy voice to the tree which brings authority to its conversations with Connor. There are some other characters in the film that help to move it along but as with the father they are not a true focus to what Connor is trying to come to terms with moving forward in life. Overall a nice fantasy that is sure to bring tears to your eyes at the end of the tales.

More in this category: « Hidden Figures Patriots Day »
back to top

We have 159 guests and no members online