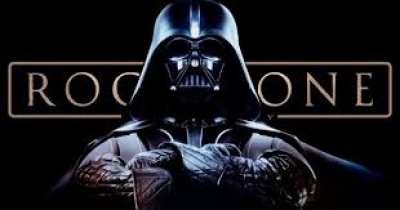 Review written by Jon Patch with 3.5 paws out of 4

Rogue One: A Star Wars Story

On a distant planet far far away there lives a family, father Galen Erso (Mads Mikkelsen), mother Lyra (Valene Kane) and their young daughter Jyn (Beau Gadsdon). They have taken up farming but have been hiding out from the Imperial army that is until now. When they receive word that the army is coming for them they try to flee but it is only Jyn that gets away but who is later found and protected by her father’s friend Saw Gerrera (Forest Whitaker). Raised for a few years by Saw until Jyn (Felicity Jones) was on her own she became quite the woman warrior with one plan in mind which was to find her father who is rumored to be making a deadly weapon for the army. This weapon known as the Death Star will be capable of destroying entire planets and Jyn along with Cassian Andor (Diego Luna) and a group of volunteers from the rebellion and elsewhere, K-250 (Alan Tudyk), Chirrut Imwe (Donne Yen), Baze Malbus (Wen Jiang) and pilot Bodhi Rook (Riz Ahmed) and others are out to steal the plans. Although for Jyn her one goal as well is to find her father and rescue him.

Little does Jyn know though that once they find her father which will lead them to the weapon plans Cassian has other orders unknown to Jyn. What many of the others don’t know is that Galen now back with the Imperial Army as an Imperial Science Officer has placed a weakness in the reactor of the Death Star yet thanks to a message from her father Jyn is made aware of the situation. When Director Orson Krennic (Ben Mendelsohn) meets with Darth Vader (voice of James Earl Jones) he is informed not to fail in his duties or else. Yet when this small group from the rebellion led by Jyn and Cassian land on Scarif, the Imperial Security Complex it is a bitter battle to the end. Jyn must find the plans with the help of a life time clue from her father and get those plans transmitted to her fleet before Darth Vader and his army can stop her and her small group of rebels either way both armies make a tremendous impact on the outcome of this information and the many lives that have worked so hard to achieve it before it is too late.

Great direction along with some intriguing yet somewhat simple written plot this film will definitely keep the audience entertained for over two hours. There are some great battle scenes, superb costumes and special effects along with a tremendous score and several familiar cast members from a long long time ago. There are many characters almost too many to name but either way the plot to destroy the Death Star is pretty much the story line led by the two main actors Jones and Luna. The story definitely has some cliffhangers, twist and turns and much unexpected moments which seems to be the norm for these new films in the Star Wars franchise. Jones and Luna work well together right up until the end and the addition of several new and old faces definitely help to tie in this current story with what might be expected in the next film but either way all the actors were on the mark in this film more so than one of two from the last Star Wars film before this one. Of course there are a number of odd looking creatures in this film that fight alongside the human species all able to fight for their side to the bitter end. Enough said so as not to give too much away in this Star Wars Story that is sure to pack the theaters and the box office take as well.

More in this category: « La La Land Collateral Beauty »
back to top

We have 183 guests and no members online