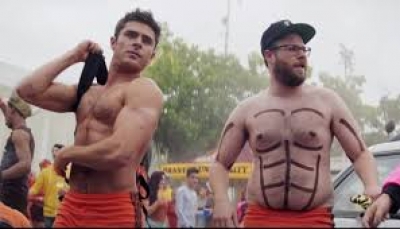 Review written by Jon Patch with 2 paws out of 4

Mac Radner (Seth Rogen), his wife Kelly (Rose Byrne) and their daughter Stella (Elise & Zoey Vargas) are still living in the same neighborhood but under more peaceful conditions. The frat house next door is vacant, Kelly is pregnant with child number two and they just put money down on a new beautiful home in the suburbs. Life could not be better for the Radner family. At the moment that is!

Teddy Sanders (Zac Efron) is all grown up and roommates with his best friend Pete (Dave Franco) that is until the good news comes along from Darren (John Early). Wedding bells for the happy young couple and first things first Teddy needs to move out. No place to go and all upset Teddy goes for a run and ends up at his old empty frat house which is for now for rent or sale.

Shelby (Chloe Grace Moretz) and her pledging sisters Beth (Kiersey Clemons) and Nora (Beanie Feldstein) decide to rent the vacant old frat house for five buckets of money a month and turn it into a sorority house called Kappa Nu. Why you ask? Well they are not the norm and want more out of college then living in a sorority where you can’t dress as you like, smoke weed as you like and just overall party as you like. So with the help of their new mentor, Teddy, they start a new sorority and take in pledges that help pay the rent each month. Now back to the Radner family, they are in escrow for 30 days with their existing home and they know that the new buyers will not close on a house that is right next door to a group of partying out of control sorority girls. So now what?

The war begins, used tampons, parties, bed bugs, mad texting later and it’s the girls against the Radner’s with the help of their best friends Jimmy (Ike Barinholtz) and his pregnant wife Paula (Carla Gallo). All is looking great for the girls until they get too sure of themselves and decide to banish the hot old guy. Crazy to say but that would be Teddy so he moves to the other side and works with the older people to close down the sorority. A fight for weed, an exposed greased up Teddy at a tailgate party and a scary clown later, things are now looking good for the elders. Not quite yet, it’s party time and the girls have a plan but will it be enough to take control of their situation. Girls just want to have fun but somewhere somehow they have to grow up too. A few months later, Pete and Darren get married thanks to the town’s newest and hottest gay wedding planner. Mildred and Jimmy Jr. meet for the first time and life for everyone goes on for better or worse, richer or poorer.

I found myself laughing a few times to several hysterical situations that Mac and Teddy find themselves involved in but other than that even though I liked this story better than the first it seemed to be a bit disjointed. Some of the scenes seemed thrown in just for the comedic value but they seemed underdeveloped making no sense within the context of what was going on at the time. I thought the main characters could have been more developed and several of their scenes could have been utilized better. Heck they kept throwing baby Stella in with a vibrator, the first time funny, the second time got it but the third and more after that, useless. They dropped the F bomb enough times in front of her but still the writers gave her no lines and the director no direction. It just seemed that this film was made to appeal to the young party going college crowd out for some stupid laughs and by all means it will work but for anyone else not so much.

There are a number of gay undertones throughout the film which involve Efron who does a nice job of bringing it which will appeal to both men and women. Rogen is his typical crazy fun self who uses his not so fit body for a few laughs. Byrne, Barinholtz and Gallo help to bring some stability to the film but in my opinion are a bit underused. As for Moretz she works her scenes well but her supporting sorority sisters Clemons and Feldstein could have been a bit more girls gone wild then girls don’t know the meaning of wild. There are a few cameos in the film that work but for the most part I think the film could have been better if the scenes flowed together and had a bit more meaning to the characters and their cause. Overall I suspect the movie will do well thanks to the trailers and its summer release but as for its longevity only time will tell. Thankfully no pets or mascots were abused in the making of this film except for maybe a large bear and his cub, Rogen and Efron.

More in this category: « Money Monster The Nice Guys »
back to top

We have 715 guests and no members online