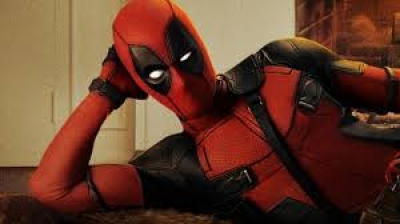 Review written by Jon Patch with 4 paws out of 4

High octane action right from the beginning of the story to the very end with some very hysterical moments during the opening credits. Deadpool, aka Wade Wilson (Ryan Reynolds) is taking a cab ride driven by his new friend Dopinder (Karan Soni) to seek revenge on Ajax aka Francis (Ed Skrein) for turning him into a freak. Let’s just say this opening moment is awesome, from 12 to 1 this superman but not hero knows how to use a gun and kick some serious ass.

Ok jumping back two years earlier Wade is a fierce bad guy paid to “F” up bad guys. He hangs out at Saint Margaret’s, no not a school for Christians by no means but rather a tough bar in a bad part of town where you walk in breathing but may not walk out at all. Bets are on the chalk board with odds for who wins and who loses, their life that is, all monitored by bartender and Wade’s best buddy, Weasel (T.J. Miller). In this bar Wade, rough, cut, hot, even in a Bea Arthur shirt, looks great kind of guy with a funny sense of humor but a mind to kill meets Vanessa (Morena Baccarin), cute but a fierce kind of woman that really knows how to make a buck. The romance kicks in with a theme and different position for every holiday, sometimes he’s in control and sometimes she is. Vanessa was perfect for Wade like he made her from a computer. Everything was perfect, sex, life, romance, them, which is until Wade hit’s the floor one night eventually finding out his days are numbered thanks to that deadly disease that starts with a C. Being the ultimate perfect companion Vanessa does not give up on him but Wade felt it best to give up on them since he did not want to burden her.

Sometime later at the bar Wade meets a very strange almost pedophile type looking man, a recruiter, let’s just call him Agent Smith (Jed Rees) who offers a dying man a chance to become a super hero. Enter Ajax, what’s his name, his real name? Francis that’s correct but don’t ever call him that or you could end up looking like a cross between Freddie Krueger and a moldy fruit. Yes, I’m referring to Wade after Ajax gets done with him at his lab. Cancer is gone and Wade has super powers and healing powers but one man can only cure his looks and that man is Francis, oops I mean Ajax. By the way Skrein sucked in “Transporter Refueled” but truly kicks ass in this film. Just thought I’d say that here in case I forget to mention it later!

The film cuts back and forth a few times from the opening scene on the expressway that will leave you laughing and gasping at the same time to the setup of how Wade takes the name Deadpool. Back to the setup, Francis has disappeared and Deadpool needs to find him so he can cure his ugliness and return to Vanessa. Yes she thinks he died already but little does she know. Ok eventually she does since Ajax kidnaps her in order to destroy Deadpool. Oh yes I forgot to mention after that unbelievable car chase, crash and shoot out on the expressway two beings came to Deadpool’s aid trying to sign him up as one of the good guys, an X-Men, Colossus (voice of Stefan Kapicic) and Negasonic Teenage Warhead (Brianna Hildebrand) two awesome characters. Oh and not to forget Ajax has his henchmen and one bad ass hot woman by his side named Angel Dust (Gina Carano) and she is no angel by far. So in the end, the ship is down, Deadpool must save his one true love, he left behind the blind woman (Leslie Uggams) he met at the laundromat and was living with, no sex just cohabitating, for that special moment to say he was sorry in order to have one happy ending. Wham!

I can honestly say I haven’t laughed this much in a movie for quite a while. Phenomenal direction, even more so writing with fantastic special effects, slow motion action, car chases, hand to hand combat and a touch of romance, this film rocks, I loved it. Yes it is rated R and rightfully so, bad language, lots of blood and some gore, a naked Ryan Reynolds and a number of women make this film worthy of the rating and of course seeing on the big screen. Remember big things do come in small packages! Anyway, I will definitely be adding this film to my DVD collection, Green Lantern who? The writing here is brilliant with so many references to films, actors, music and fashion that you almost have to see it again to keep up and you want to for sure because its hysterical and extremely cleaver. As for the soundtrack if you like the 80’s this one could definitely be a winner and I loved the 80’s.

Reynolds is downright superb in this film, his character development, his delivery of his lines, serious and funny, his action scenes and his leading man image are all perfect. Baccarin at first I was not sure but as she grew on Reynolds character she grew on me and “Wham” I too fell in love with her. You read what I said about Skrein, I did not like him in his last film but this one he shines and does it oh so well. Hildebrand is a bit on the quiet side but it works as does Kapicic as the voice of the giant steel man. Carano even though she doesn’t speak much is the perfect match for Skrein’s character and knows how to strike her opponent, just a few pun on words, you’ll understand what I mean when you see this film and take my word for it you want to. Wham!

More in this category: « How to Be Single The Witch »
back to top

We have 364 guests and no members online