How to Be Single Featured 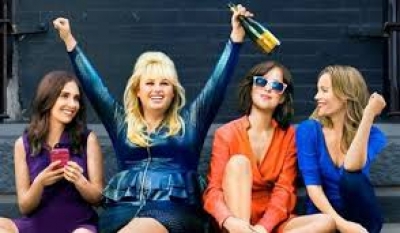 Review written by Jon Patch with 2.5 paws out of 4

How to Be Single

Lately it seems that when I sit down to write these romantic reviews I pore myself a glass of red wine. According to my doctor it’s good for my heart, physically, but I think it tends to help when writing about the heart, the romantic side of it at least from a single point of view. Ok enough from this lonely hearts club band of one! Yes that’s supposed to be a funny! Anyway this story starts with the romantic relationship between Alice (Dakota Johnson) and Josh (Nicholas Braun) after four years together Alice has decided that before she settles down with one man she needs to go find herself first. What is that all about, going to find yourself? Does being with one person mean you’ll lose yourself forever or that you’re locked in shackles in a house cave not allowed to live and by living I don’t mean with a different partner every night. Well for Alice it was partially true.

Alice finds a best friend and work partner as a para-legal for a NYC law firm, Robin (Rebel Wilson) a jolly old girl that spends all her waking moments in a bar, drunk and sleeping with every man possible. Sounds like my last partner, ugh! Ok back to Alice who happens to meet Tom (Anders Holm) a local bartender that is the absolute lady’s man, player with no filter who through it all knows how to play the game never dropping a card that is until he meets Lucy (Alison Brie)who happens to be looking for the perfect husband. Good luck with that one! Seriously I’ve only had three sips from my wine glass. Bitter party of one, nope, my table is not ready because I am over it and all good on my own. I’ve found my moment! As for Lucy she may find it in the most unexpected places and situations like that with George (Jason Mantzoukas). The world is so confused we seem to always want what we don’t have that is until we get it.

Alice who was living with her sister Meg (Leslie Mann) until Robin screwed that one up has found her own place in the city. Meg, a local doctor spends her every day delivering babies, never wanting one of her own that is until her moment with the cutest little girl in an exam room. It really is a special moment in this story. A few months later Meg is pregnant but not from her much younger boyfriend that she met Ken (Jake Lacy). A matter of fact Meg hides the truth from Ken that is until it becomes no longer possible to hide the fact that her breasts are getting bigger as well as her stomach. Let’s just say age truly doesn’t matter. Sometimes you can find a younger lover that has more on their mind then partying all the time. Enter Mr. Mom and bang some people do get lucky even in a city of eight million people.

Alice according to Robin has LTRP and I’ll leave that definition left to you seeing the movie but it is funny and there are many others out there with the same condition. Not that that’s a bad thing but hey she left Josh to find herself right! Enter David (Damon Wayans Jr.) the perfect man, great looking, great shape, great job and a daughter, Phoebe (Zani Jones Mbayise) but no wife yet along with all that there is baggage. Why do so many of us carry baggage but we never get to go anywhere heck I’ve had my bags ready for Italy but that hasn’t happened! Yet life for all these characters is different yet similar in so many ways, big city, small world. Paths cross in more ways than one which effect lives of so many in totally different ways. Sometimes you meet that magic in your life that lets you be you but a better you. Yes that is possible! Life is not a joke so we all must try to stay away from the dicksand, it’s like quicksand but with testosterone. Sometimes the unexpected happens in a crazy but loving kind of way and sometimes it doesn’t. Sometimes we text to say we are sorry and sometimes we don’t yet sometimes we should and sometimes we shouldn’t. Baby steps are sometimes the best way so turn the water back on, be honest at all times, cherish those one moments in time and most of all love yourself and sometimes if Italy doesn’t work try the Grand Canyon and just enjoy the view you might actually find yourself.

I thought this film was going to be a total cut up with more laughter than philosophy about to be or not to be, single that is! Either way I enjoyed it and like most of us, man, woman, straight, gay, single or married you will totally relate with so many aspects of this story. A bit cliché of course but still nicely done. A great soundtrack and the back drop of a wonderful city help to make this film even more enjoyable. I always enjoy seeing Johnson on the screen being a bit biased since her grandmother is a very dear friend of mine. Tippi Hedren, remember “The Birds”? Dakota Johnson definitely has many traits of her mother Melanie Griffith for sure. Wilson is always a treat even though I don’t always find her that hysterical yet I did like the twist in the end about her character. Mann was perfect and I enjoyed her every action and the storyline behind her role. Wayans doesn’t have a huge roll but either way he looks good at it. Holm I am not familiar with but I feel like we might be seeing more of him in the future. Braun was a nice addition to the group as was Lacy who stands out in the end as the perfect man. A nice cast with a group of nicely developed supporting actors helps make this story come to life on the big screen about the true life of dating in the real world. Live and learn and make sure to check out this film at a theater near you, single or not.

More in this category: « Zoolander 2 Deadpool »
back to top

We have 374 guests and no members online