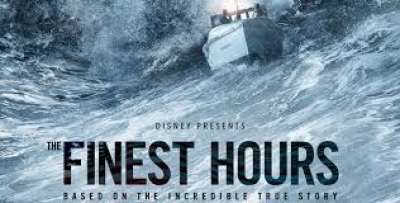 Bernie Webber (Chris Pine) works for the U.S. Coast Guard in Massachusetts. A good looking lad he has been chatting with Miriam (Holliday Grainger) for about a month on the phone. That is until they decide to meet on a double blind date. In November of 1951 in Wellfleet, Massachusetts, Bernie brings along Gus his friend and associate while Miriam brings her friend which leads to a boat ride in the harbor. On February 17, 1952, Miriam asks Bernie to marry her on April 16, but soon thereafter Bernie is sent out to sea with three other men Richard Livesay (Ben Foster), Andy Fitzgerald (Kyle Gallner) and Ervin Maske (John Magaro) under the command of Daniel Cluff (Eric Bana) to help the Pendleton T2 oil tanker that split in half out at sea due to a violent blizzard that hit the coast. Ironically that was not the only tanker that split in two that day but it was the one that Bernie sought after ten miles off the coast of Chatham. One major issue besides the storm, the bitter cold and the violent seas, Bernie had to get his small thirty six five hundred craft over the bar and out to open waters without sinking.

On the oil tanker many lives were lost but half the ship is still afloat carrying over thirty seamen. Since the Captain was on the side of the ship that sank Frank Fauteux (Graham McTavish) recommended that chief engineer Ray Sybert (Casey Affleck) take control of what’s left of the ship in the hopes of saving all men aboard. There are sceptics but the one most vocal is Brown (Michael Raymond-James) that fights for control of leadership that is until his harsh decisions are proven risky with the possible outcome, death. The ship or at least what’s left of it has ruptured in several places let alone its split in half, water is rushing in and in about 4 to 5 hours it will sink. They have one hope and that is to crash the ship on land out at sea. One would think there is no land at sea especially that far out but apparently there is and the men must do their best to reach it in hopes that a rescue ship will find them before it’s too late.

Back at land Miriam is quite the ball of fire as she takes issue with commanding Coast Guard officer Cluff. At sea Bernie has lost his compass and his hopes of finding the tanker seem lost. If you know your history Bernie finds the ship and is able to save 32 men on his small boat but without a compass he is unsure he can find his way home. He intends on looking for the town lights when close enough but he is unaware due to the blizzard all the power has gone dead. In the history of the U.S. Coast Guard this rescue was the biggest small boat rescue to date.

The film is gripping and intense at sea and for two hours it moves well thanks to the direction and writing. I thought the relationship between Bernie and Miriam develops quickly but back then that’s the way it was I guess. Times were very different back in those times and based on relationships in this day and age maybe for the better. Thanks to the action in the film though the lack of character development with most of the supporting characters doesn’t seem to stop the audience from getting involved in the characters hopes for survival. At least it didn’t for me! I have to admit I teared up a few times in the end. There ae some moments though especially with Pine that I believe his accent seems to fade in and out. The use of 3D is somewhat effective especially during the horrific rescue scenes when we are left sitting on the edge of our seats surrounded by high winds, crushing sea waves and the faces of men hoping to get home to their families and friends.

Pine does a nice job with his character even though he is basically quite the quiet and somewhat shy person from start to finish which truly doesn’t help him shine in this role. Thankfully the real Webber knew the sea and did not have to express his personality in order to save the men. Grainger like I said is a firecracker, loud and boisterous, a woman how takes control and wears the pants in the relationship and as an actress she succeeded to pull several emotions from within me. Affleck also had a shy type of demeanor to him but when needed he showed his strength and stability for the characters role and as an actor as well. I wasn’t as pleased with Bana I thought he was a bit lost in this role but for the most part his character doesn’t spend a lot of time on screen. As for the rest of the cast they all were a huge contribution helping to bring this true story to life on the big screen making it worthy of a theater ticket while on your possible blind date. Even though the film screams male demographic the love story and raw emotions between Bernie and Miriam will help appease the women in the audience. The sea is a scary place if you don’t understand it and thanks to this film I don’t think I ever want to be caught out there in a storm any time soon.

More in this category: « The 5th Wave Kung Fu Panda 3 »
back to top

We have 242 guests and no members online