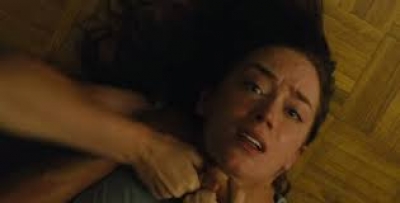 Kate Macer (Emily Blunt) and her partner Reggie (Daniel Kaluuya) at the FBI are tired of raiding homes, looking for hostages, finding dead bodies or explosives but never finding the people behind the drugs and horrific murders. Kate is suddenly asked by some unknown government officials to leave her kidnap response team at the FBI and volunteer her time with some secret operation lead by Matt (Josh Brolin) and accompanied by a very secretive partner Alejandro (Benicio Del Toro). Little did she know what she was getting into and all the rules in the law books are currently thrown out the window.

They did not want to enlist Reggie due to his law background but with the help of Kate he found a way to work his way into their operation. The target was to stir up some trouble in Mexico right outside El Paso so to ruffle the feathers of Manuel Diaz (Bernardo P. Saracino) in hopes of him leading Matt and his team to the source of all the hell in Mexico and the drug trade, Fausto Alarcon (Julio Cedillo). As for Kate she is told that nothing will make sense in the beginning but it will in the end. She is concerned about Alejandro since she knows nothing about him but as for the operation he has his reasons for being there and in the end you will truly see what those reasons are and why. Dead bodies hanging from bridges, car caravans and gun fights on the highways, shoot outs underground to not being able to trust anyone Kate is faced with many moral dilemmas that involve choices that will forever change her life or death in the land of the wolves.

The film is superbly directed and written. There are characters that may seem unimportant one minute but then become a focal point to an important scene. The musical score in this film is brilliant and keeps the intensity going from start to finish. In the tunnel scenes the way the director uses the night vision and the overhead satellite images is fascinating to watch. In the end the horror of this story just continues to get even more intense making you want to cancel any upcoming trips to Mexico any time soon.

Blunt is magical as she struggles with herself what the answers are to all her questions and Kaluuya although just a pawn to her character helps to keep her character in check. Brolin and his good guy image is questioned here but either way whether you look at him as good or bad his acting is stupendous. The real gem in this story though is Del Toro, it doesn’t matter if he speaks or just stands in a scene no matter what happens he owns it. Some great supporting cast members like Hernandez who plays Silvio and Saracino with their more moderate roles add suspense to this intense film. Really one hell of a ride from beginning to end this film is truly 3.5 paws out of 4 by Jon Patch.

More in this category: « The Walk The Martian »
back to top

We have 178 guests and no members online