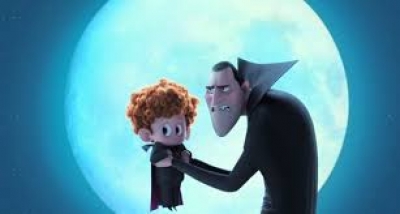 Congratulations Mavis (voice of Selena Gomez) and Jonathan (voice of Andy Samberg) it’s your wedding day and both sides of the family are attending. At Hotel Transylvania for the nuptials between Mavis and Jonathan, monsters are seated on the bride’s side and human on the grooms. One year later, Mavis is pregnant and father Dracula (voice of Adam Sandler) is excited to have a vampire grandson. Everyone is excited a matter of fact, Frankenstein (voice of Kevin James), Wayne (voice of Steve Buscemi), Griffin (voice of David Spade), Murray (voice of Keegan-Michael Key), Blobby (voice of Jonny Solomon) amongst many of the other friends and relatives.

One year later, Dennis (voice of Asher Blinkoff) is celebrating his birthday but Dracula is afraid he may not be a vampire after all since his fangs have not shown. He’s young and he may be a late bloomer. Mavis is on a rampage baby proofing the hotel, no sharp objects or dangerous staircases for Dennis. At two years old he speaks his first words but not exactly what Dracula had hoped for. At almost five years of age and still no fangs and no character of becoming a scary monster Dracula and his staff of friends decide to try whatever it takes to make him a true vampire. One major problem, well maybe two problems, first Mavis and Jonathan are thinking of moving to California to be a normal family and secondly they left Dennis in the hands of grandpa Dracula while away on the west coast. Oh big mistake! Let the monster adventure begin and Dennis is the only student to learn how to kill, scare, bite and act like a vampire as well as transform into a bat. Well it isn’t happening!

Meanwhile Mavis is enjoying her new adventure in California, shopping in a mini mart and spending time with the in-laws Grandma Linda (voice of Megan Mullally) and Grandpa Mike (voice of Nick Offerman) but when she calls to check on Dennis her father is obviously hiding something. A quick return home and Mavis is not pleased with what she finds. It’s not until sometime later at Dennis’s five year old party when Great Grandpa Vlad (voice of Mel Brooks) arrives along with some very scary gargoyles does all hell break lose. When Dennis’s best friend Winnie (voice of Sadie Sandler) becomes at risk of being hurt does Dennis show his true colors plus much more. In the end, blood is thicker than water, ask a vampire they know!

I absolutely loved this film almost as much as the first one. The direction is superb, the writing even batter. Great animation, music and the 3D pops making this animated film a big hit for Sandler of which he needed since his films have not been performing as well as they once did. Perfect timing for this film to hit the theaters with Halloween right around the corner but either way it’s definitely worth a day or night out at the movies. All the voices are spot on as are all the characters making this film one monster of a good time for young and old. With 3.5 paws out of 4, I’m Jon Patch.

More in this category: « The Intern Everest »
back to top

We have 597 guests and no members online