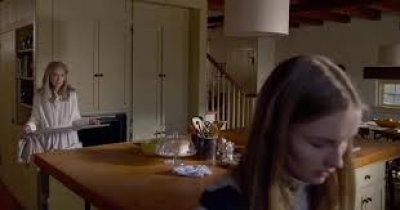 Over the hills and through the woods to grandmother’s house we go. Well not quite but sort of close to the old fairy tale. A single mother Loretta (Kathryn Hahn) is about ready to go on a getaway cruise with her new boyfriend Miguel (Jorge Cordova). She hasn’t spoken with her parents in years and doesn’t like to talk about the fight they had to her children but in need of some time away she decides to send 13 year old Becca (Olivia DeJonge), who happens to be filming the entire trip in hopes of achieving an elixir for her mom, and her little 8 year old brother Tyler (Ed Oxenbould) to Nana (Deanna Dunagan) and Pop Pop’s (Peter McRobbie) house in the countryside of Masonville where she grew up.

Upon getting off the train the kids are welcomed by the grandparents and so far everything is working out fine considering the kids have not seen them since they were born. Once they arrive at the house in the hills the grandparents set some rules for the kids, in bed by 9:30 and stay out of the basement due to mold. The weather is cold with snow on the ground and the kids are settling in just fine. Day two the kids still filming and joking around decide to play hide and seek under the house but what they seek is something that they wish stayed hidden. Suddenly the kids begin to hear strange noises at night and notice that Nana and Pop Pop are acting a bit peculiar but they decide to abide by the rules for the most part. Remember the saying curiosity killed the cat?

Day three the kids communicate from time to time with mom via skype on Becca’s laptop that is until the visual becomes one sided thanks to a mishap caused by Nana. That night when the kids question Pop Pop about Nana’s actions at night he explains that she suffers from an illness known as Sun Downing! On Thursday a visitor stops by named Stacey (Celia Keenan-Bolger) but the grandparents are not home. She explains how nice the old couple was when they would visit her at rehab trying to help her along her journey towards mental recovery.

Becca tries to interview Nana for her film but every time she brings up what happened between her and her daughter Loretta Nana would freak out causing Becca to cease the interview or change the subject. Pretty much the same would happen with Pop Pop with the results being question unanswered. Strange behaviors have continued to happen as the kids continue to film their trip but on the last day of their visit all that could have gone wrong did leaving the kids no option but to come face to face with their darkest fears. In the end, one should try to forgive and never hold on to anger and as for the little rap man himself Tyler he’ll tell you it never tasted like chicken. You’ll know what I mean when you see the film and by all means you should.

I had my doubts on this film since Shyamalan has not turned out a decent film in quite some time but I’ll say one thing I laughed and jumped many times during this film. He has the right mix of hysterical moments followed up by suspense and thrills of the unknown. Great direction and writing with enough twists and turns to keep you guessing right to the horrific end. Honestly this film was truly a comeback for Shyamalan and should do well at the box office based on word of mouth. Even though a lot is filmed from the so called cameras of Becca and Tyler there is no jumping around to make you nauseous. Hahn does not have a huge role but manages to do well with it. McRobbie does a nice job as Pop Pop bringing mystery and bit madness to the scenes but it is Dunagan that is stupendously odd and frightening so ever convincingly so that she will have you on the edge of your seat watching her every movement. DeJonge really does well helping to narrate her own film within a film but it is Oxenbould who steals every scene with his humor mixed in with fright convincing the audience that these two kids could actually be true siblings on and off screen. In the end this film is truly worth seeing in the theater it will make you laugh one second and scream the next with 3.5 paws out of 4 I’m Jon Patch.

More in this category: « A Walk in the Woods Maze Runner: The Scorch Trials »
back to top

We have 228 guests and no members online