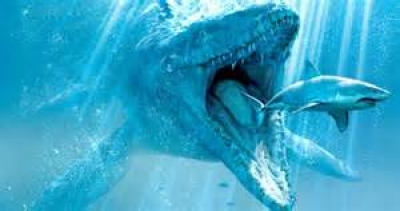 So what came first the raptor or the egg? Either way it is quite the experience watching it claw its way out of its shell in the opening moments of this story. It’s Christmas, snow is on the ground and Karen (Judy Greer) and her husband Scott (Andy Buckley) are sending their two boys Zach (Nick Robinson) and his little brother Gray (Ty Simpkins) off to Costa Rica to see Claire (Bryce Dallas Howard) Karen’s sister. The trip is not just a visit to see their Aunt after seven years or so but rather also to experience VIP status at Jurassic World which Claire manages.

Once at the park which appears like a combination of Sea World and Universal Studios, although with the main attractions being dinosaurs, the boys are having a pretty good time even though Claire is not spending any time with them but rather her assistant Zara (Katie McGrath) is entertaining them. The park is amazing as the 20,000 people there for the adventure are up close and personal with many of the dinosaurs. That is except for the velociraptors, T-Rex and some huge water creature that puts Shamu to shame. Owen (Chris Pratt) spends most of his time with the raptors training them pretty much like one would a dog with a clicker. Amazing the techniques they used so I know they consulted very closely with animal trainers for his characters part. All is going well in the training department until Hoskins (Vincent D’Onofrio) gets involved since obviously this man has ulterior motives. Owen and the raptors are not friendly to his personality especially since out of the four raptors Blue is the Beta and Owen the Alpha and Hoskins is the obviously the bad guy.

Zach and Gray have decided to ditch Zara and adventure on their own in what looks like a hamster ball. Actually kind of a cool idea for travel and sightseeing of the beautiful scenery in Cosa Rica and the abundance of dinosaurs wondering the forest lands. Friendly dinosaurs until and incident occurs and a genetically altered and created dinosaur, Indominus Rex, bigger, louder, and un-socialized gets out of containment and begins to wreak havoc on the island and all the other animals and people on it.

John Hammond entrusted Masrani (Irrfan Khan) the eighth richest man in the world with the island and the deed to make people happy and thrilled but in order to keep the investors happy Dr. Henry Wu (BD Wong) and his staff of scientists were constantly reaching to create new species by the technique of gene splicing. Little did most people that ran the park realize that their latest creation is smarter and more capable of killing everything in its path than any other creature known to the dinosaur world. Once this creature gets out of containment the statement “everyone remain calm” is non-existent, like the dinosaur should have remained in modern times, extinct! Dangerous and scary is all relevant to the prey versus the predator for example to a canary a cat is a monster whereas to humans so is a dinosaur which is much more ferocious than the modern day elephant especially one in captivity. All creatures need socializing yet without it one never knows what a creature is capable of doing in unfamiliar territory.

As the war begins and Owen and Claire are out in the forests that resemble the world 65 million years ago they are on a mission to find her missing nephews, capture or kill the new dinosaur and hopefully save lives along the way. Little did Owen know though that he would need the assistance of some un-expectant friends and especially one with more teeth in order to bring some normal back to a horrific and catastrophic environment that went all wrong in a very quick moment.

Since I host Talkin’ Pets on a weekly basis I loved the training techniques, the language and the theories they present in working with these dinosaurs which very closely resemble the same techniques used to train our domestic pets. The film starts off a bit slow but when it builds it truly takes flight in many ways. I only wish they spent a little more time developing the relationships of the main characters, Owen, Claire, Zach and Gray. We do get a few supporting cast members involved in the story but not enough so to care if they live or die in the carnage which is somewhat on the light side anyway. Great cinematography, sound, score, editing and concept which has several similarities and throw back moments to Jurassic Park that all make this story move quickly, cause you to jump from your seats and just plain enjoy the movie in IMAX and 3D, keeping your eyes glued to what happens next.

Pratt of course is easy on the eyes so the women will love him for that but he also controls many of the scenes for his acting abilities as well. Even the writers have a few cliché and corny moments between him and Howard who by the way does a nice job projecting a woman with little personality and stiffness while at work but comes to life a bit more in the wild while running for her life, eventually becoming a bit of a bad ass. Khan and D’Onofrio do justice as does the rest of the cast but it is Robinson and Simpkins that take the dinosaur by the tail and kick some serious butt although I still wish the writers developed their characters a bit more. Yet overall the film is directed well and full of amazement, adventure, thrills and chills and surely worth a night out at the theater. Written and enjoyed with 3.5 paws out of 4 by Jon Patch.

More in this category: « Insidious: Chapter 3 Dope »
back to top

We have 222 guests and no members online