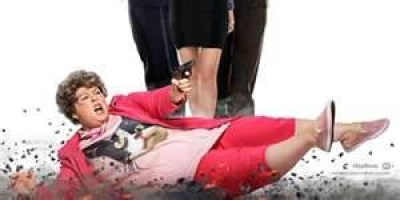 Susan Cooper (Melissa McCarthy) is an overweight, single, no cats yet CIA agent that has been never sent into the field but rather is the eyes and ears behind her partner Bradley Fine (Jude Law) keeping him safe and informed while on a job. She works in the CIA basement with some other agents and a number of rampant vermin that have pretty much taken over the downstairs office. A lonely woman that thinks her life is uneventful has one main event going on which happens to be the crush she has on her partner Fine.

Currently Fine is on a mission to track down a nuclear bomb and one person happens to know the whereabouts, Rayna Boyanov (Rose Byrne) daughter of Tihomir Boyanov (Raad Rawi). Rayna is looking to make a sale and the buyer is Sergio De Luca (Bobby Cannavale). One evening when Fine enters into a ritzy home he fines more than he bargained for, his untimely death. Stricken by the loss of CIA agent Fine, Elaine Crocker (Allison Janney) has but one choice and that is to send in a CIA agent that is unrecognizable. Agents Karen Walker (Morena Baccarin) is out of town in Capri, the other agents along with Rick Ford (Jason Statham) are all too familiar to the current enemy. So Crocker makes the decision to send in Coop as a tracker, to not get close to the situation but rather just report on what is going down between De Luca and Rayna. Yet knowing that Rayna is a cold blooded killer Cooper under a hidden identity goes in like a bull in a china cabinet with her eyes and ears being her friend Nancy (Miranda Hart), not exactly a spy by no means.

Enter Paris; Cooper under a hidden identity is on a search for not only the nuclear bomb but the person who killed her friend. Little does everyone know but this single heavy white woman with no real CIA training has some incredible moves and knowledge. From Paris to Rome to Budapest Susan is traveling the world, befriending some unusual people and with some help from Aldo (Peter Serafinowicz) a foreign agent she really gets around. One problem her associate Ford seems to be a bigger distraction than she bargained for as he tends to get in her way in solving this mission and becoming the Spy she was meant to be, Super Cooper. In the end, Susan Cooper Super Spy kicks some serious ass, takes flight, overtakes the slutty dolphin trainer, and crawls out of the basement and into her first mission complete.

This film puts McCarthy back in the game after her last film that was a bit of a miss. The direction and writing by Feig is superb. I definitely can see this film taking on a part 2 especially if it does well at the box office which it should. Some phenomenal stunts in the mix with great editing and photography accompanied by a nice soundtrack really helps this combination of comedy and James Bond type action come together to deliver a must see movie.

McCarthy once again solidifies her star power on the big screen yet this time as a secret agent. Her mix of action, comedy, foul mouth at times and character development really helps to propel this story along with a nice co-starring cast. Law is not the perfect secret agent like James Bond but he does well filling the shows adding a number of twists and turns to his character. Hart was well done with just the right amount of screen time. Byrne tends to do a nice job but I thought her character was much better taking the edge rather than falling from it. Statham was in his element as an action star but not as a comedian but he truly does well delivering some funny moments even after the credits when a special out-take is shown. Cannavale is sufficient as the bad guy but if given any more attention in the film it may not have worked in his or the stories favor so overall he did well. Albeit aside, this film is truly worth seeing and I give it 3 paws out of 4 by Jon Patch.

More in this category: « Entourage Insidious: Chapter 3 »
back to top

We have 248 guests and no members online