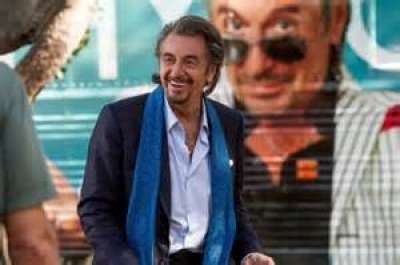 Danny Collins known for “Hey Baby Doll” is a young folk singer who grew up to be an all-time favorite to his fans but to himself after four decades Danny (Al Pacino) discovered he needed to make a change especially after his manager Frank Grubman (Christopher Plummer) gave him a found letter that John Lennon wrote to him in 1971. This letter is the reason Danny decided to leave his mansion and his fiancé Sophie (Katarina Cas) who was sleeping with Judd (Brain Smith) behind Danny’s back. He packed his bag and headed to New Jersey, took a room at the Hilton where he meet Nicky (Josh Peck) the valet, Jamie (Melissa Benoist) the front desk girl and Mary Sinclair (Annette Bening) the manager. It did not take long before Danny was hitting on Mary but her interest was at an all-time low even though his fame and fortune was quite abundant.

He had a reason to take up residence in the local New Jersey Hilton and that was to right a wrong. A knock on a suburban residence door later and Danny is one step closer to meeting the son Tom Donnelly (Bobby Cannavale) he never ever met before. First step though is meeting Tom’s pregnant wife Samantha (Jennifer Garner) and their little daughter Hope (Giselle Eisenberg) who happens to suffer from ADHD. Samantha knew when Tom came home it would not be a delightful experience but much to Danny’s strengths he never gave up and was determined to be a part of their lives. He helps Hope attend a very prominent school in New York, and eventually comforts Tom in his time of need when he hears the bad news about his health. It’s a rocky road for everyone but through determination and forgiveness lives are forever changed.

Back at the Hilton the attempt to win over Mary by Danny continues as he also tries to write a new song in is room. The road is not an easy one for a man that only knew the life of young women, drugs and alcohol yet beneath the exterior of a broken man is a loving soul that means well by his friends and family. In the end life is never perfect and trials and tribulations continue to exist but thankfully Danny has found a clearer path that made him into a giver rather than a receiver. One big day at Aptaker Berger Cancer Center Danny’s son was thankfully referred to by his doctor as ‘Tom’. See this film and you’ll know what I mean!

I absolutely was pleasantly surprised since I’ve heard nothing about this film that follows a man on a true journey of forgives, love and understanding. It is brilliantly written and directed with a great score and will hopefully be appreciated by many as a heartfelt story that is worth the money in the theater. It contains nudity, bad language, drug use but also outlines the fact that second chances can truly make a difference in the life of a person and the friends and family that surround that particular person. I laughed and cried and was absolutely moved by this story.

Pacino is brilliant from start to finish and deserves a nod come next Oscar season. Bening is a delightful distraction as is the little moments of banter with Benoist and Peck. Plummer is a pleasure to watch and although Cannavale seemed a bit in and out for me he pulls it together to have the audience care for him. Two favorites are Garner who hits every mark and Eisenberg who if she doesn’t have ADHD she should because she was that good. Overall I was surprised that I actually knew nothing about the story walking in but walking out I’d recommend it to everyone as a true must see film that is worth every minute watching it on the big screen. Written and appreciated for its superb direction, writing and acting I give it three and half paws out of four by Jon Patch.

More in this category: « Effie Gray Ex Machina »
back to top

We have 267 guests and no members online