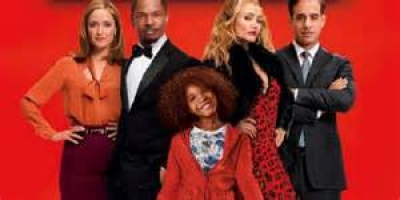 A young girl named Annie (Quvenzhane Wallis) every Friday after school runs, rides and walks to the Damani restaurant in hopes of one day seeing her parents again. She was left there years ago with nothing but half a heart necklace and a note, of which she hopes will help find her parents. Currently she is living under the foster care of Ms. Hannigan (Cameron Diaz), a washed up has been singer, that lives off the girls she harbors at $150 a week from the state. Her admirer and a good guy that runs a local store across the street, Lou (David Zayas), would sweep her off her feet in seconds but Ms. Hannigan pays no attention.

Will Stacks (Jamie Foxx), one of the richest men living in a New York City penthouse, known for Stacks Mobile, is running for Mayor and his staff run by Guy (Bobby Cannavale) and Grace (Rose Byrne) will stop at nothing, well almost nothing, to paint the perfect picture of Stacks so the general public will fall in love with him. When Stacks happens to save Annie’s life on the streets from being hit by a van his staff decided to sensationalize the story, which led to Stacks inviting Annie to move in and later adopting a dog, named Sandy. The public went crazy for the story, the pictures, the little girl and her dog. As for Ms. Hannigan she was still trying to take a short cut to fame and fortune and when she saw an opportunity to capitalize on it she went for it. Yet, fake parents, mistakes made and a car chase later confirms sometimes what one is looking for has been right in front of them all the time. In order to find out who you really are it may take the opportunity to start over, look at your surroundings, act on them and maybe just maybe the sun will come out tomorrow.

I have to say I absolutely loved this movie, I laughed, I cried, I fell in love with Annie like I think others will after seeing this nicely directed, well written musical that resonates the fact that dreams can come true. Foxx was superb, Wallis fantastic, Byrne, Zayas and Cannavale good supports along with Annie’s friends Tessie (Zoe Margaret Colletti), Mia (Nicolette Pierini), Isabella (Eden Duncan-Smith) and Pepper (Amanda Troya). The only exception was Diaz who I thought lacked in her role almost appearing a bit over-done and trying too hard to please. Albeit I was thrilled with this film and am sure families with young kids will as well for the holiday. Written and thoroughly enjoyed with 3 out of 4 paws by Jon Patch.

More in this category: « Wild Night at the Museum: Secret of the Tomb »
back to top

We have 516 guests and no members online