Guardians of the Galaxy Featured 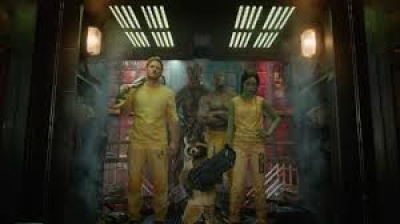 On earth in 1988, a young Peter Quill (Wyatt Oleff) watches his mother Meredith (Laura Haddock) pass away lying in a hospital bed. Before she closes her eyes she gives Peter a present to be opened after she dies. Shortly thereafter she reaches for Peter to hold her hand but stricken in pain he does not before she takes her last breath. He runs from the hospital into a foggy nearby field when suddenly a light appears from the sky and Peter is taken away by Yondu Udonta (Michael Rooker) and his group of hungry men.

Twenty six years later, Peter (Chris Pratt) is walking on an abandoned planet named Morag in search of an orb. Listening to his cassette player and his mother’s favorite music he fights off little creatures while dancing his way to find the orb. Once found and on his way back to his ship he is confronted by Korath (Djimon Hounsou) and his soldiers who are working with an evil ruler named Ronan (Lee pace) who awaits in the Dark Aster for the return of Korath and the orb. One problem the orb does not end up in the hands of Ronan but rather still with Peter in the capital city, Xander.

Ronan sends Gamora (Zoe Saldana) instead of Nebula (Karen Gillan) to retrieve the orb and bring it to his worship. This does not settle well with Nebula who has always had harsh feelings for her sister, daughter of Thanos (Josh Brolin). She approaches Peter after a buyer for the orb rejects their deal and soon a fight for control of the orb pursues, not only between these two but now involving Rocket (voice of Bradley Cooper) and Groot (voice of Vin Diesel). Diesel apparently did not have a lot of lines to memorize since all he says is “I am Groot” throughout most of the story but his actions and expressions are truly priceless. So Gamora wants the orb and Rocket and Groot want Peter but what they all get is a trip to the Kyln, a prison in space.

A prison escape later with the help of Drax (Dave Bautista) and the party of five are out to find their payment of four billion units by the Collector (Benicio Del Toro) located on Knowhere, a mining colony floating in space. Soon Ronan appears and a battle ensues only to have Ronan take control of the orb that contains an infinity stone within its core. The five know they need to retrieve this orb and understanding that most of their lives they have been surrounded by enemies they are all willing to die amongst friends in order to save Nova and the rest of the world from Ronan.

In the end, people die, Nova Prime (Glenn Close) and Corpsman Dey (John C. Reilly) put their faith in the Star Lord aka Peter Quill and battle Ronan till death they do part. Revenge is unsatisfied, a family is formed, a present is revealed and there truly ain’t no mountain high enough to stop the Guardians of the Galaxy.

I absolutely loved everything about this film. I entered with high expectations which hardly ever get met but this film met them 100%. Great direction and even better writing that included drama and comedy accompanied by a terrific score and must have soundtrack of oldies this story moves from start to finish with superb character development and just perfect film making.

Pratt is superb as an action star, good looking and hysterical. Saldana is a good match bringing her sexy yet deadly self from scene to scene adding a bit of tension between her character and Pratt’s. Bautista was a bit stereotypical but the writers had fun with it by going in and out from smart to idiotic at times. Diesel like I said earlier does not have many lines but the humanoid plant he plays is superb. As for Cooper his voice is perfect for Rocket the raccoon and he has some of the best lines as well as partnerships with Groot. Pace is a great villain with a look of sexy yet sporting a shaky leg at times. Rooker is a good side track to the story line along with Close and Reilly. Hounsou is a true warrior and Gillan does her part justice as well. Del Toro is odd and ideal for the Collector and overall every other supporting character is fantastic. I really can’t say much of anything bad about this film from open to close so I write this with four paws out of four by Jon Patch.

More in this category: « Hercules Into the Storm »
back to top

We have 517 guests and no members online