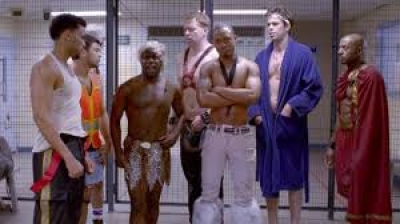 Screen Gems and Will Packer Productions present a PG-13, 106 minute, Comedy, directed by Tim Story, written by Keith Merryman and David A. Newman with a theater release date of June 20, 2014.

The entire group of couples are back for a special occasion, the wedding of their close friends Michael (Terrence Jenkins) and Candace (Regina Hall). The say what happens in Vegas stays in Vegas and when this entire wedding party arrives in town there is no telling what will take place. Pretty much for the few days there anything can happen and it does. Cedric (Kevin Hart) is asked to be Michael’s best man but only by default since it was truly the blue eyed chef Dominic (Michael Ealy) that was supposed to be the real best man but things happen. Like when Cedric booked his room at the Vegas hotel on his girlfriend Gailzilla’s (Wendy Williams) gold card and later found out that the matter of four thousand dollars is a huge difference from forty thousand dollars. You think he would have caught on due to the private pool, the private butler Declan (Jim Piddock), the size of the room, the drinks and the many other amenities that a large price in Vegas would bring you on the strip.

Well everyone is there Sonia (La La Anthony), Zeke (Romany Malco) and his girlfriend Mya (Meagan Good) who later are faced with conflict when Zeke the freak gets noticed by an array of women in town upsetting Mya of course. Jeremy (Jerry Ferrara) and Kristen (Gabrielle Union) both of whom is trying to have a child but so far are unsuccessful. Lauren (Taraji P. Henson) and Dominic both of whom are offered lucrative new jobs with one major issue that will play a part in their future, one position in Vegas and the other in New York leaving their life in Los Angeles very questionable. Bennett (Gary Owen) and Tish (Wendi McLendon-Covey) a very odd couple and not quite the lookers but wait no longer for a pretty woman moment for Tish when the girls set out for a bachelorette party in town. Not to forget Michael’s frat boy buddies Terrell (David Walton) and Issac (Adam Brody), yes they’re white! It is that evening that like a moment out of one of “The Hangover” movies does everything go wrong for the happy couple and it’s not due to the mother-in-law in town, Loretta (Jenifer Lewis), well not totally but thank goodness for Uncle Eddie (Dennis Haysbert).

A night out in Vegas the night before a wedding, the guys are out and about and the girls are all hot and heavy but when both worlds collide a night in the pokey is sure to cause a stir for the happy couple and the future of their life together. Meanwhile Cedric has found out his true bill and is doing everything in his power to come up with the money before Gail stomps on him like the real Godzilla on a small Japanese city. In the end Vegas is the sin city of the west and drinks, drugs, sex and anything goes, Vegas will always be the place of chances, poker faces, love and regret.

The film is truly hysterical, well directed, brilliantly written with a nice soundtrack and a lot to look at from beginning to end. Every one of the actors was spot on but it is Hart that truly takes the prize for bringing his game. The film is just as good as the first and thanks to such an excellent cast this second installment should do just as well if not better as the first. I absolutely enjoyed this movie about love, relationships, friends and family all trapped within sin city otherwise known as Vegas. I recommend a date night out for this film since it will truly appeal to both men and women. Written and enjoyed with three paws out of four by Jon Patch.

More in this category: « Jersey Boys Transformers: age of Extinction »
back to top

We have 622 guests and no members online