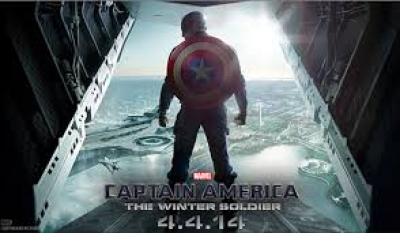 After emerging from several decades of ice Steve Rogers aka Captain America (Chris Evans) is trying to live a normal American life in Washington DC.  While on a morning jog Steve out paces Sam Wilson aka Falcon (Anthony Mackie) several times over on his run around the Washington mall stopping to chat about the joyful and inspiring things in life Steve needs to become more familiar with in this modern age.  Cut to Natasha Romanoff  aka Black Widow (Scarlett Johansson) who rides on to the scene to pick Steve up in her sports car they both drive away later to find out they are about to set foot somewhere in the Indian Ocean to help save several hostages aboard a ship taken over by terrorists.  Once matters are taken under control Nick Fury (Samuel L. Jackson) and the S.H.I.E.L.D. headquarters are soon to discover a target on their heads especially for that of Fury.
For those of us that may not have seen the first Captain America film the museum in this sequel does a fine job of filling in the blanks about the history of Captain America.  Hand to hand fights, car chases, guns blasting and some extreme special effects and stunts pull this brilliant film together as a must see in the theater but it is also the story line that is fantastic with a great score and costumes.  As Fury becomes the focus of attention by authorities lead by Alexander Pierce (Robert Redford) we soon discover that sometimes the good guys are not all that good after all.  A matter of fact when Captain America and his members of S.H.I.E.L.D. come face to face with the Winter Soldier  (Sebastian Stan) they soon realize that the past once good now bad has come back to haunt them.  In the end, Captain America discovers that what once was a friendship has now become the Winter Soldiers mission to destroy S.H.I.E.L.D. forever as he and his associate’s race time to stop this new threat from old history.
Great direction, superb writing and truly a must see at a theater near you.  A dramatic super-hero story mixed in with moments of levity laced in this story may be long but worth it for the entire family.  The film has a more believable yet intriguing plot that is sure to keep you entranced from beginning to end so much so that it may be worth seeing twice but if not definitely worth adding to you DVD collection.  Evans is phenomenal and attacks this role as if Captain America were actually real rather than a comic book character.  Johansson is a much more utilized character in this rendition and as always plays well on screen with Evans as well as alone.  Jackson is spot on as he fights for his life and Mackie is truly a breath of fresh air as he soars across the sky.  Stan is the focus of this story for the most part but if you stay throughout the entire credits at the end of the movie you’ll discover even more about what the future brings for the members of S.H.I.E.L.D.  Written and thoroughly enjoyed with three and half paws out of four by Jon Patch.

More in this category: « Need for Speed Rio 2 »
back to top

We have 394 guests and no members online