Oz the Great and Powerful Featured 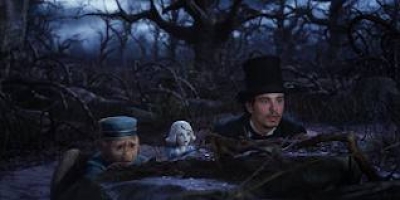 
The year is 1905 in Kansas, Oscar Diggs aka “The Great Oz” (James Franco) is a magician for a traveling circus.  A bit of a womanizer he entices girls like May (Abigail Spencer) with a so called music box that was given to him by his mother during the war than glamorizing them to be his assistant on stage in his act, in turn all for his pleasure.  When the strongman (Tim Holmes) finds out that Oscar also presented a music box to his wife (Toni Wynne) Oscar flees by way of balloon only to find himself thrust within the eye of a fierce twister.  In screams of fear to become a better man if only he would live Oscar finds himself in a land of color, waterfalls, butterflies, birds, river fairies and mystery.
He soon is greeted by Theodora (Mila Kunis) a witch that lives in the Emerald City with her sister Evanora (Rachel Weisz) yes also a witch.  According to prophecy a man named the great and powerful Oz will fall from the sky and one day to save the city from the evil witch.  Although the evil witch has set out to destroy Oz already since word travels fast that he has entered this fantastical world of OZ.  Oscar aka Oz is informed that if he captures the wand of the evil witch than he would be king and gain all the riches of the kingdom.  So Oz sets out to find the evil witch in the dark forest but not alone he is joined by his new trusted friend Finley (voice of Zach Braff), a talking and yes flying monkey and China girl (voice of Joey King) who Oz glued back together when her village was attacked by the evil flying baboons.
There are many references to “The Wizard of Oz” film and the story line is extremely well written tying in so perfectly as a prequel but I’m a bit amiss by the fact that the writers left out some very cliché moments and props from the film we all love.  The director definitely modernizes this film with the CGI, language and special effects but I must say that some of the CGI, green screen, scenes are a bit awkward making them appear a bit over-done and not so real.  Grant it there are few of these moments, the walk down the yellow brick road along the sunflowers and another scene with horses in the fields but overall besides these few scenes the effects and especially the 3D are extremely well done.  So much so that my friend April that accompanied me jumped out of her seat at least 6 or more times.  We get introduced to some historical moments in this story but it almost seems that the writers left some very important aspects out of the story line so as to maybe consider another film if this one does well at the box office which I believe it will.
There are farmers, tinkers and munchkins of course and even a green apple that plays a starring role but overall the man once reared as a fake magician but now loved as the great and powerful Oz that will hopefully save the land of Oz brings his best illusions to the table with the help of some very special friends including Glinda (Michelle Williams), the good witch in order to save a kingdom and destroy evil.  In the end a man that once strived for greatness has found something more powerful, goodness.
There are many story lines I’ve left from saying in this review since I don’t want to give too much away but albeit the writing is truly spot on as a prequel to the great story we all grew up with starring Judy Garland as Dorothy.  I felt that some of the modern twists to this prequel could have been taken down a notch to make it more similar to the cinematography and all of the “Wizard of Oz” but we should remember that they are meant to be slightly different and no film could ever do better than the one we love with Dorothy and her dog Toto.  Franco is a hit or miss for me in many of his films but I must say I thought he did an exceptional job as Oz in this film.  Kunis and Weisz do not play well together in the film as sisters but as actors other than being a little stiff at times they seem to do justice to their evil sides.  Williams I thought was perfect as Glinda giving her character a bit more depth and development more so than the other witches.  Braff as the voice of Finley was my favorite hands down and the CGI behind his character was touching, humorous and emotional as was China Girl which was voiced by Joey King.  In the end this film will absolutely take you on a wondrous journey into a land that we all grew up with throughout the years shedding some light on so many questions about the Land of Oz, the great and powerful and the origin of the witches.   Written and loved with three and half paws out of four by Jon Patch.
Read 2832 times
Published in Movie Reviews
Tagged under

More in this category: « Dead Man Down The Columbian Connection »
back to top

We have 556 guests and no members online