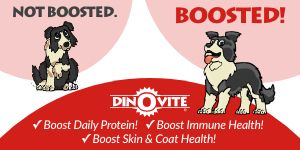 100% Raw Nutritional Meal Booster for Dogs 90-Day Money Back Guarantee Just like with humans, a nutritious meal is essential for your pet’s overall health and vitality. We have created our Meal Boosters to bring a delicious raw element to your dog’s diet. The freeze-drying process ensures that all nutrients are locked in, delivering the nutrition your dog needs. The only thing getting stuffed will be your dog from our delicious Meal Booster lineup. Give Their Bowl a Boost! Loaded with Nutrients Freeze dried process preserves the needed vitamins and minerals Made in the USA 100% Made in the USA, Shipped from Kentucky. 100% Raw Meat Increase the meat to carb ratio for the balanced meal your dog needs. Gluten & Grain Free Gluten, Grain and Guilt Free Great Meaty Taste Pairs great with Dinovite for the most finicky of eaters! Easy to Feed Just add a scoop to their food, or this can be used as a food itself! 100% Raw Meal Booster. Give Their Kibble a Boost! Scoop a tablespoon Mix it in with food Let your dog enjoy! Meal Booster 30 Scoops Net Wt. 5.3 ounces (150 gm) Benefits of the Boost Introducing this freeze-dried, omega rich booster to your dog's diet will help support: ✓ Skin and Coat ✓ Gut Health ✓ Overall Wellness and Immune System ✓ Proudly Made in the USA Canadian Orders: Due to Canada prohibiting certain product imports we are unable to ship NubOnubs™ treats into Canada. 90-Day Guarantee with Dinovite 90 Day Risk Free Trial On Your First Order With Dinovite
Read more... 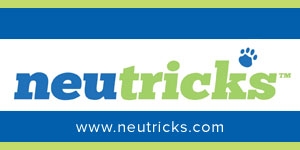 Neutricks and Neutricks for Cats are an exciting new approach to healthy brain aging for the senior pet wellness market.

Based on the success of the protein “apoaequorin” (originally discovered in jellyfish) in canine trials, Neutricks developed two new supplements to support your pet’s cognitive health with a unique approach for both dogs and cats. Neutricks for Dogs has been formulated as a tasty chewable tablet that dogs love. Neutricks for Cats is available in a great tasting fish flavored sprinkle.

Neutricks is focused on the discovery, development and commercialization of novel supplements to provide support during age-related changes in memory, cognitive performance and related issues of aging pets. The Company’s first product, Neutricks brand dietary supplement (apoaequorin), is now available for sale by veterinarians. Neutricks is backed by research that shows it helps support brain cell health.

Just like people, animals can experience mild memory problems associated with aging. A pet that seems strangely distant, confused, or disoriented, may be a candidate. More than 28 million pets (dogs and cats) in the U.S. have canine mild memory issues. Independent research and veterinarian testimonials have reported that Neutricks® has positive benefits on animals with mild memory issues. As veterinary care increases the life span of our pets, the senior pet wellness market will grow. The pet-nutritional market was valued at $2.1 billion dollars in 2007 and 43% of this figure is from the sale of pet supplements alone. Sales of pet supplements are expected to reach $1.7 billion by 2012. There is growing demand for new and effective products to meet the needs of older pets.

Better primary medical care has led to longer-lived dogs and cats, and a subsequent increase in the prevalence of senior mild memory issues. In a study at the University of California-Davis, 62% of 11- to 16-year-old dogs showed signs in at least one category of memory impairment. In a survey of pet owners, nearly half of dogs age 8 and older showed at least one sign associated with mild memory problems. The Veterinary Journal published a recent study of pets seen by veterinarians in whom they estimated that 14.2 percent of older pets presented with mild memory problems yet only 1.9% were addressing the problems.

Ryan Holden Singer, Founder of K-10+ water soluble dog supplements will join Jon and Talkin' Pets Saturday 3/1/14 to discuss and give away his products

K-10+ WATER SOLUBLE DOG SUPPLEMENTS REVOLUTIONIZE PET HEALTHCARE FIRST-OF-ITS-KIND PRODUCT CELEBRATES NATIONWIDE PETCO LAUNCH
NEW YORK, NY – (February 3, 2014) – The recent nationwide launch of K-10+, the revolutionary new line of pre-measured, single serve water soluble vitamin packets for dogs, is a hit with dog owners. K-10+ has created an entirely new product category, and in the process has redefined what is possible with pet healthcare. The vet-approved, breakthrough proprietary formula dissolves in water, is up to 9x more effective than ordinary pills and chews. The easy to use packets solve a very common challenge for pet owners, are affordable and can be administered anywhere.
Ryan Holden Singer, founder of K-10+, shared, “I created K-10+ after realizing how difficult it was to get my dogs to take their medications and supplements. I heard from so many pet owners who relied on bizarre rituals and tricks to get their pets to swallow pills and chews. I had to find an easier and more effective way to care for my dog’s health.”
Designed for maximum hydration and palatability, K-10+ is easily added to a dog’s normal drinking water, creating a stress free experience for pets and pet owners. The packets are easy to open and dissolve quickly when emptied into a bowl and filled with fresh water. It’s that simple.
The complete K-10+ product line includes Calming, Multi-Vitamin, Glucosamine, Omega 3, UT Support, and Senior Care varieties, ensuring optimal vitality and wellness, enhancing health and longevity, and providing a higher quality of life for dogs and their owners.
Added Ryan, “The response from the team at Petco, our exclusive partner, has been overwhelmingly positive. From store managers to sales associates and their appreciative customers, we are hearing amazing stories every day of how easy and effective K-10+ really is. We’re so excited that word of mouth is spreading quickly and that we’re really making a difference in the lives of pets and their caregivers. “
K10+ is available in Petco stores nationwide and online at Petco.com. Each box of K-10+ comes with 28 packets for a one to two month supply, depending on the size of your dog.  All K-10+ products are proudly manufactured in the U.S. with only the finest quality ingredients and are veterinarian recommended. To learn more visit K-10plus.com, ‘Like’  facebook.com/k10plus and follow on Twitter and Instagram at @ilovemyk10.

We have 310 guests and no members online