(LOS ANGELES, CA) September 8, 2011 - SEAACA (Southeast Area Animal Control Authority; www.seaaca.org) has released a list of tips to help pet owners keep their pets safe from wild animals. As communities grow and expand into previously undeveloped areas, wild animals (coyotes, raccoons, snakes etc.) are losing much of their natural habitat. As a result, they are becoming more acclimated to urban and suburban surroundings and can navigate access into residential areas and back yards. This encroachment of wild animals can be a problem for domesticated pets including cats and dogs. Wild animals can easily hurt, maim or even kill household pets that do not have the survival skills or temperament to defend themselves from wild animals.

To help pet owners, SEAACA has provided some guidance to keep domestic pets safe from wild animals. Some of SEAACA’s tips include:

·      Do not leave food outside. Wild animals can be expert foragers. If you leave food outside (leftovers, pet food or anything else), it can be a magnet for wild creatures, which then can create an unsafe encounter with your pet.

·      Do not let your pet roam outdoors. If you live next to hills or more natural terrain, you might have many wild animals nearby. When domestic pets roam in these areas, they can be targets for attack.

·      Get your pet vaccinated. Wild animals can be a mode of rabies transmittal. Ensure your pet is vaccinated just in case he or she is attacked and infected.

·      Notify the authorities. If you notice a wild animal or animal tracks near your home, immediately contact your local animal control or wildlife service agency. They have the resources and skills to handle these situations and make your environment safer for your pet.

·      Protect your home. Make sure wild animals cannot get into your home through open doors or windows. Many wild animals roam in the nighttime, when you and your pets are sleeping and may not hear them enter your home. Lock and secure your doors and windows before you go to bed.

·      Clear your surroundings. Excessive debris, vegetation, fallen trees and hillside brush and shrubs can be enticing hiding places for snakes and other wild animals. Clear the areas around your home to avoid unwelcomed surprises for you and your pets.

·      Keep your pet on a leash. When hiking or walking trails with pets, make sure to keep them on leashes that are at most six feet in length. Longer leashes or no leashes at all, can allow your pet to explore hidden areas and possibly uncover snakes or other wild animals.

“As our population continues to grow and we encroach upon wildlife, we need to be extra vigilant about pet safety,” noted SEAACA Executive Director, Dan Morrison. “With a few smart precautions, we can protect our much-loved pets from dangerous encounters with wild animals,” he added.

NEW YORK—The ASPCA® (The American Society for the Prevention of Cruelty to Animals®), at the request of the Schoharie County Emergency Operations Center and New York State Office of Emergency Management, has dispatched its Field Investigations and Response team to Schoharie County, N.Y., to assist in the emergency rescue of animals displaced by the severe flooding following Tropical Storm Irene.

The ASPCA is leading the effort with assistance from the International Fund for Animal Welfare (IFAW), which will be managing water rescue operations for animals affected by the recent storm. Additionally, PetSmart Charities, Inc. is supplying much needed sheltering supplies such as crates, blankets, and bowls.

ASPCA responders arrived Tuesday evening to begin assessing needs and coordinate efforts with IFAW on emergency water rescues for pets trapped inside flooded homes. A state of emergency has been declared for Schoharie County due to extensive flooding, road closures and closed bridges around the county. Displaced animals will be taken to the Animal Shelter of Schoharie Valley where they will be triaged and temporarily housed until they are reunited with their owners.

“The ASPCA is committed to helping pet owners and animals impacted by Tropical Storm Irene,” said Tim Rickey, senior director of ASPCA Field Investigations and Response. “We will continue to do everything we can to help this community.”
Over the weekend, ASPCA responders from across the country deployed to New York City to prepare for animal emergencies in anticipation of the storm. The ASPCA helped hundreds of animals throughout the City’s five boroughs, assessing the needs at evacuation centers where pets were welcomed and delivering rabies vaccines and microchips for cats and dogs at the emergency shelters. Additionally, the ASPCA transported approximately 100 animals that had been temporarily evacuated from a Long Island shelter via its Animal Transport Trailer, a custom-built, 60-foot-long vehicle designed to save the lives of animals that fall victim to natural disasters or animal cruelty and neglect.
“The best thing you can do for yourself and your pet in the event of an emergency is to be prepared,” added Rickey. “Having a plan in place ahead of time can save you precious time and energy, so you can focus on quickly getting you and your pets to safety.” The ASPCA urges pet owners to develop an emergency plan in advance to keep their families and pets safe as hurricane season reaches its height.
For more information on disaster preparedness and safety tips from the ASPCA, please visit www.aspca.org/pet-care/disaster-preparedness/.
About the ASPCA®
Founded in 1866, the ASPCA® (The American Society for the Prevention of Cruelty to Animals®) is the first humane organization established in the Americas and serves as the nation’s leading voice for animal welfare. One million supporters strong, the ASPCA’s mission is to provide effective means for the prevention of cruelty to animals throughout the United States. As a 501(c)(3) not-for-profit corporation, the ASPCA is a national leader in the areas of anti-cruelty, community outreach and animal health services. The ASPCA, which is headquartered in New York City, offers a wide range of programs, including a mobile clinic outreach initiative, its own humane law enforcement team, and a groundbreaking veterinary forensics team and mobile animal CSI unit. For more information, please visit www.aspca.org.
To become a fan of the ASPCA on Facebook, go to http://www.facebook.com/aspca. To follow the ASPCA on Twitter, go to http://www.twitter.com/aspca. 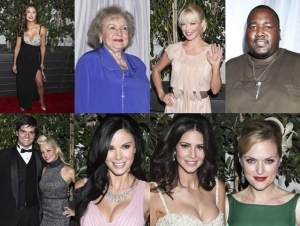 WEST HOLLYWOOD, CA - On August 27th, iconic actress Betty White attended the first annual Diamonds Not Fur Gala to benefit spcaLA and Animal Alliance in support of a Fur Free West Hollywood. It was held at Voyeur nightclub in West Hollywood. The event was hosted and founded by actress Katie Cleary, who is the spokesperson for Fur Free West Hollywood, the program to initiate a ban on the sale of fur in the City of West Hollywood. Betty White presented the "Diamonds Not Fur Humanitarian Award" to Madeline Bernstein. , president of spcaLA, who said"I am honored and proud that community activists, celebrities and Betty White created this event and then came out on behalf of spcaLA and the humane treatment of animals. Working together, we can accomplish so much." The presentation was not without mention of the importance of conflict-free diamonds. "Inhumane treatment of any living creature, human or animal, is unacceptable, particularly for the sake of vanity." said event committee member Ben Decker.

The night wrapped up with special performances by The Mad Musician and Fawn. Over 300 guests came out to support the ban. An estimated $60,000 was raised via ticket sales, donations, and live and silent auctions.  "The event exceeded all my expectations," says Katie Cleary, founder of Diamonds Not Fur and spokesperson for Fur Free West Hollywood,"It made all the hard work worthwhile to see how many people showed up to support the cause and show their love for animals! We raised a lot of money for some very worthy organizations and are very proud to represent the spirit of West Hollywood, leading the way as the most humane city in America."

Beverly Hills plastic surgeon and major sponsor of Diamonds Not Fur, Dr. Davis B. Nguyen, M.D. offers a statement, "I am proud to sponsor such a worthy organization as spcaLA and thrilled that Diamonds Not Fur will help bring much needed attention to the plight of animals in need. Many thanks to Betty White whose tireless efforts on behalf of animal rights is an inspiration to all those who care deeply about this issue."

West Hollywood councilmember John D'amico made the announcement that the measure to ban the sale of apparel fur in West Hollywood would be voted on by West Hollywood City Council on September 19, 2011 and that it is expected to pass. This will be the first city in the United States to pass such a ban.

Animal Alliance is a 501c3 non profit animal rescue organization that is committed to sponsoring homeless and unwanted companion animals in need of housing, food, and medical attention. A unique program offered by Animal Alliance is one that contributes to the medial costs of low income families' pets so that these animals may receive necessary care. Another project is the support of several feral cat communities in the city. Animal Alliance has been given the privilege by the city of Los Angeles to distribute spay and neuter vouchers to private individuals and other rescue groups.

We have 313 guests and no members online